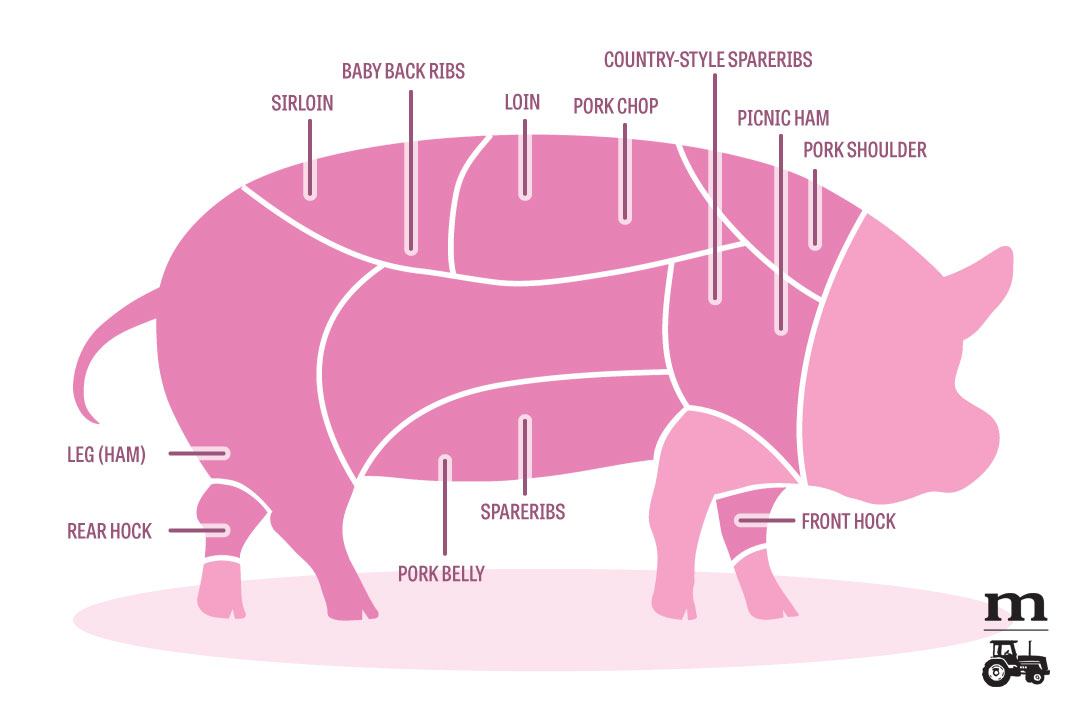 Pork is divided into large sections called primal cuts, which you can see illustrated in the pig diagram above. These primals are then broken down further into individual cuts. The most tender cuts of pork are from the rib and loin. It's where we get the expression "high on the hog" — the most desirable cuts of meat come from higher up on the animal. By contrast, the shank and shoulder muscles give us the toughest cuts. But with the proper cooking, even those tougher cuts can be luscious and tender.

BOSTON BUTT: Despite what its name might indicate, the pork butt, also called the Boston butt, comes from the upper shoulder of the hog. Consisting of parts of the neck, shoulder blade, and upper arm, the pork butt is a moderately tough cut of pork with a good deal of connective tissue. Pork butt can be roasted or cut into steaks, but it is also well-suited for braising or stewing or for making ground pork or sausages. Just above the Boston butt is a section of fat called the clear plate or fatback, which can be used for making lard, salt pork, or added to sausage or ground pork.

PICNIC SHOULDER: The pork shoulder (also called the picnic shoulder) makes for a great boneless rolled roast.  It can also be cut for bone in Country Ribs or ground for sausage meat.

PORK LOIN: Hogs are bred to have extra long loins so they can have up to 17 ribs, unlike beef and lamb which have 13. The entire pork loin can be roasted or it can be cut into individual chops or cutlets. The sirloin end of the loin makes for a great bone in loin roast (3-4# avg). While the rest of the loin can be cut into bone in chops.

HAM:The back leg of the hog is where we get fresh or smoked ham. Fresh hams are usually roasted, or ground and used for sausage. If smoked you can have a boneless or bone in option.  It can also be cut into smoked ham steak.

PORK BELLY: The pork side (also called the pork belly) is where we get bacon. Pork belly meat can also be rolled and roasted.

SPARE RIBS: Taken from the belly side of the ribs where they join the breastbone, pork spareribs are often prepared by grilling very slowly over low temperatures. Pork spareribs can also be braised or cooked in a slow cooker.

JOWL:The pork jowl is mostly used in making sausages, although it can also be smoked and made into jowl bacon.

U.S. Inspected and Passed by the Department of Agriculture. EST. 2592

Website and Online Farm Store Powered By Eat From Farms